The Central Complex at the Bhabha Atomic Research Centre (BARC), Mumbai, has a distinct architectural style, originally designed by an Italian firm in the late 1960s. In the 1990s, there was a need to expand some of its facilities, due to the diminishing space available in the Central Library and the growing demand for the Lecture Theatre (or Central Auditorium).

This proposal was put forward to the relevant authorities. After a detailed study, it was decided that an extension of the existing buildings would be the most economical and practical solution, and the debate on the aesthetics of the expansion was resolved by proposing structures that extended out of the main buildings, using the same architectural concepts.

The library expansion plan shown below was accepted and carried out. 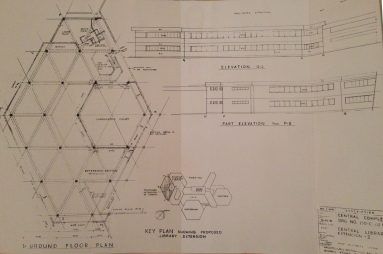 The lecture theatres were not extended due to other planning reasons, but the design that was proposed is as follows. The architectural, interior and town planning designs and concepts on this website, unless otherwise stated, are the intellectual property of the owner, Sandhya Sharad.

Some of the designs showcased were created while working in a team and later implemented by developers. Efforts have been made to state this where applicable, although the conceptual work showcased remains the property of the owner.